STRENGTHENING THE HANDS OF THE NEW GROUP OF WORLD SERVERS

Meditation is the primary form of service for those following a spiritual path. It is a means of cooperation and alignment with hierarchical intent. The new moon period follows upon the cycle of outbreathing in the rhythmic cycles of the breath; it is a time of pause wherein together we can establish a soul-mind-brain alignment. During this period we work in thought to concretize the ideas and impressions received at the time of the full moon period and undertake the sometimes difficult process of translating them into practical plans that can be of service in the world. The effect of this meditative effort is to enhance the many ways in which the “power of the one Life” and the “love of the one soul” are working out through all true servers everywhere.

Q: What are the underlying causes obstructing the path towards human unity and the consequent need for reform within the Security Council?

Q: How can esoteric servers contribute to the resolution of these causes?

A: Promote the development of the intuitive sense in humanity. The new yoga,  Agni Yoga, is a REVELATORY practice dispelling ILLUSION. Newer TRUTHS about hierarchical democracy and spiritual governance need to be revealed by the NGWS.

Truth is nonpartisan. There’s no possible stance of neutrality in facing it, not even for nonprofit organizations fearful of losing their tax exempt status. We either accept or reject it. Neutrality is rejection by ambivalent attrition.

Ambivalence is mostly due to our inability to hear, touch and see a recognizable truth. If we can’t discern the good, the true and the beautiful from the evil, the false and the ugly, and act on it, what good is any esoteric training for –here and now- except for some vague future accomplishment?

May the Power of our united Light prevent the appearance, negate the quality and destroy the life of all lies, particularly the Egregor of Prevarications currently dwelling in the White House of the United States of America. -JB

The Hierarchical Plan and the World Situation Today

A version of this article appears in print on April 13, 2018, on Page A19 of the NYT New York edition with the headline: Face to Face With President, Without Mincing Words.

In his absorbing new book, “A Higher Loyalty,” the former F.B.I. director James B. Comey calls the Trump presidency a “forest fire” that is doing serious damage to the country’s norms and traditions.

“This president is unethical, and untethered to truth and institutional values,” Comey writes. “His leadership is transactional, ego driven and about personal loyalty.”

“The silent circle of assent. The boss in complete control. The loyalty oaths. The us-versus-them worldview. The lying about all things, large and small, in service to some code of loyalty that put the organization above morality and above the truth.”

An earlier visit to Trump Tower in January made Comey think about the New York Mafia social clubs he knew as a Manhattan prosecutor in the 1980s and 1990s — “The Ravenite. The Palma Boys. Café Giardino.”

The central themes that Comey returns to throughout this impassioned book are the toxic consequences of lying; and the corrosive effects of choosing loyalty to an individual over truth and the rule of law. Dishonesty, he writes, was central “to the entire enterprise of organized crime on both sides of the Atlantic,” and so, too, were bullying, peer pressure and groupthink — repellent traits shared by Trump and company, he suggests, and now infecting our culture.

“We are experiencing a dangerous time in our country,” Comey writes, “with a political environment where basic facts are disputed, fundamental truth is questioned, lying is normalized and unethical behavior is ignored, excused or rewarded.”

“A Higher Loyalty” is the first big memoir by a key player in the alarming melodrama that is the Trump administration.

Comey is blunt about what he thinks of the president, comparing Trump’s demand for loyalty over dinner to “Sammy the Bull’s Cosa Nostra induction ceremony — with Trump, in the role of the family boss, asking me if I have what it takes to be a ‘made man.’”

Put the two men’s records, their reputations, even their respective books, side by side, and it’s hard to imagine two more polar opposites than Trump and Comey: […]

One is an avatar of chaos with autocratic instincts and a resentment of the so-called “deep state” who has waged an assault on the institutions that uphold the Constitution.
The other is a straight-arrow bureaucrat, an apostle of order and the rule of law, […]

One uses language incoherently on Twitter and in person, emitting a relentless stream of lies, insults, boasts, dog-whistles, divisive appeals to anger and fear, and attacks on institutions, individuals, companies, religions, countries, continents.

The other chooses his words carefully to make sure there is “no fuzz” to what he is saying, […]

One is an impulsive, utterly transactional narcissist who, so far in office, The Washington Post calculated, has made an average of six false or misleading claims a day; a winner-take-all bully with a nihilistic view of the world. “Be paranoid,” he advises in one of his own books. In another: “When somebody screws you, screw them back in spades.”

The other wrote his college thesis on religion and politics, embracing Reinhold Niebuhr’s argument that “the Christian must enter the political realm in some way” in order to pursue justice, which keeps “the strong from consuming the weak.”

It’s ironic that Comey, who wanted to shield the F.B.I. from politics, should have ended up putting the bureau in the midst of the 2016 election firestorm; just as it’s ironic (and oddly fitting) that a civil servant who has prided himself on being apolitical and independent should find himself reviled by both Trump and Clinton, and thrust into the center of another tipping point in history.

They are ironies that would have been appreciated by Comey’s hero Niebuhr, who wrote as much about the limits, contingencies and unforeseen consequences of human decision-making as he did about the dangers of moral complacency and about the necessity of entering the political arena to try to make a difference.

Michiko Kakutani, former chief book critic for The New York Times, is the author of the forthcoming book “The Death of Truth: Notes on Falsehood in the Age of Trump.” 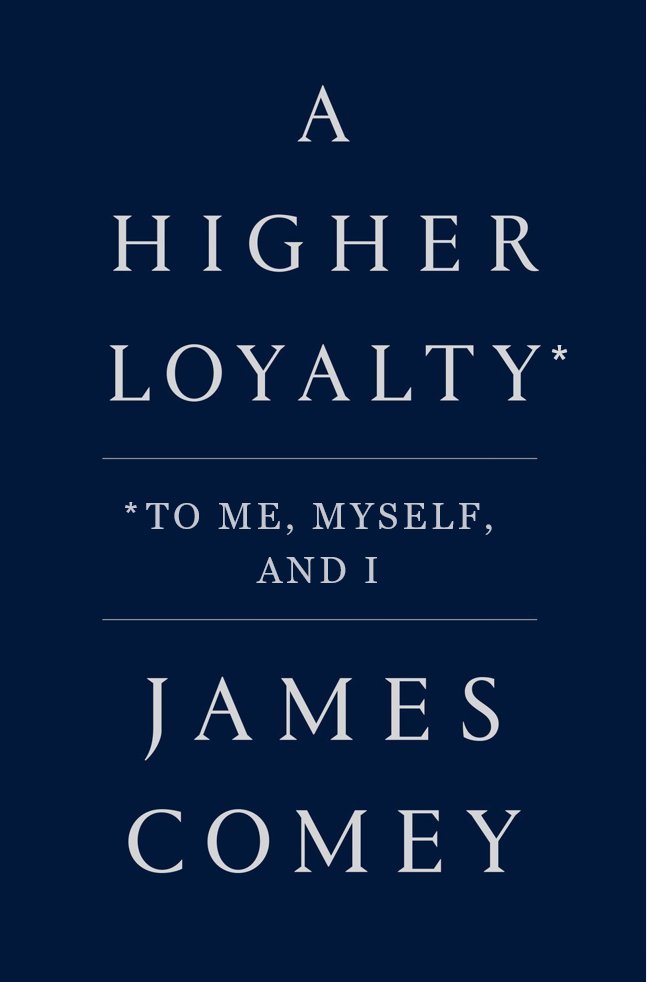 The Republican National Committee (RNC) on Thursday kicked off its ad campaign against former FBI Director James Comey ahead of the release of his new book, releasing a mock cover of the memoir attacking the former FBI chief’s “ego.”

Comey compares Trump to a mob boss in the book and reveals that Trump asked him to probe salacious allegations in an unverified dossier of opposition research compiled by former British spy Christopher Steele.

The former FBI director writes that Trump repeatedly brought up the unproven allegation that while staying in Russia, he asked prostitutes to urinate on a bed previously used by the Obamas.

According to the New York Post, Comey wrote that Trump “brought up what he called the ‘golden showers thing’ … adding that it bothered him if there was ‘even a one percent chance’ his wife, Melania, thought it was true.”

Trump denied the allegations in conversations with Comey, and said that he didn’t like how the claims affected the first lady, according to The Washington Post.

Comey on a Trump impeachment

focusing on the Seed Group of Political Organizers

in the Complex Information Age.”

Today we live in a unique time in modern history, as we experience the flux, confusion and complexity that accompanies the old age passing out and a new age beginning to dawn;  a time when means of communication and ways of sharing information have increased exponentially; a time when truths and untruths are confused, and illusions are  heightened; a time when humanity faces enormous challenges and crucial decisions. It is a time when things feel to be spinning out of control. Who is in control and what control do we as individuals have, if any? What choices do we have and how do we make those choices? How do we find clarity amidst excess information, and discern what is true? And, what do we most need to know and do? These are significant questions we hope to address in this Aries talk at the start of a new astrological cycle as we prepare at Easter for this higher interlude of the spiritual year.