Photosynthesis is a fundamental fact in Nature.

These intuitive insights may reveal a spiritual formula of the most fundamental process in Nature as it relates to Humanity’s planetary service.

The human kingdom has a spiritual function similar to that of the angels in the (lab)oratory of Nature we call the vegetable kingdom. The Great Invocation is the formula describing this vital process whereby Humanity fulfills its “psycho-synthetic” function in the planetary ecology.

In this process of Planetary Psychosynthesis, the Soul of One Humanity invokes the Light, the Love and the Energy or Power emanating from the spiritual Sun, to produce Right Relations, human and planetary. The very righteousness of these relations seals the door to evil, thus restoring the Divine Order, the Plan of Goodwill, on Earth.

From the center where the Will of God is known
Let purpose guide all little human wills –
The purpose which the Masters know and serve.

From the center which we call the human race
Let the Plan of Love and Light work out
And may it seal the door where evil dwells.

This year we dedicate the Pan American World Invocation Day to the sealing of the door to the evil of demagogy, the corruption of democracy resulting from totalitarian tendencies of authoritarian governments promoting a “post-truth world,” both in Latin America and in the United States of America.

Let us seal –everywhere– the door where evil dwells!

“A massive fraud, the evil sum of his deficiencies, devoid of everything but the hollow ideology of a megalomaniac.”

“Humanly impoverished” and “ignorant of government, history, of science of philosophy of art, incapable of expressing or recognizing subtlety or nuance” and “destitute of all decency”.

[JB] Trump is not the cause of the current malaise in our democratic system. When personal and partisan self-interest trumps the common good, then the corruption of democracy is inevitable.

When the majority of the citizens in a country is willing to trade off the values of the common good for the price of personal material goods, then the problem is not the demagogue taking advantage of the opportunity but the materialism suffocating the spiritual life of the country.

A dying country cannot always be resuscitated by a new leadership. JFK, MLK and Robert Kennedy were assassinated five decades ago for attempting to resume Lincoln’s mission, as were Carter and Obama, not with bullets but with regressive obstructionism.

A dying country may need to rise from the ashes, reborn like the Phoenix. A worldwide economic collapse may accomplish this collective transition, if  planet Earth still remains to live in after hurricane Trump.

The latent seeds of racist fascism and divisive self-interest must die before a country can rise again to lead the world in the quest for goodness, beauty and truth. We need to make the world good, beautiful and true, again.  –José Becerra

Thank you for participating on NYTimes.com.

Your published submission can be found at this link:

[R&I 430] These Forces of Evil work through a triangle of evil, one point of which is to be found in the Zionist Movement in the United States, another in central Europe, and the third in Palestine. Palestine is no longer a Holy Land and should not be so regarded.

The U.S. will formally move its embassy in Israel to Jerusalem from Tel Aviv today. Ivanka Trump, President Trump’s daughter, and Jared Kushner, his son-in-law, are among the high-ranking American representatives who will attend the opening ceremony. Thomas Coex/Agence France-Presse — Getty Images

Since the creation of Israel,  G.W. Bush and D.J. Trump are the only two U.S. Presidents not elected by popular vote.  Both have been recognized as Friends of Zion.

Don’t we know which Lodge sponsors Zionism? The White Brotherhood certainly does not.

A corrupt President has temporarily taken over the U.S. government making it, not the people of the United States, an agent of evil, disunity and chaos in the world, with the support of the U.S. Evangelicals, and domestically employing the same methods used by Zionist dictators: terrorizing (bullying), withholding information, browbeating their opponents, making false claims and bribing and corrupting.

[R&I 680] The menace to world freedom today lies in the known policies of the rulers of the U.S.S.R. and in the devious and lying machinations of the Zionists. (Written before 1950)

The menace to world freedom is no longer restricted to the Soviet Union and Israel.

Last year outgoing U.S. President Barack Obama abstained, allowing a vote against Israeli settlements to pass in the Security Council of the United Nations.  With the change of administration, the U.S. government has undone the corrective action, has given up any pretense of neutrality and is now openly supporting the evil Zionist dictators promoting Israel’s “greedy grabbing” territorial agenda. 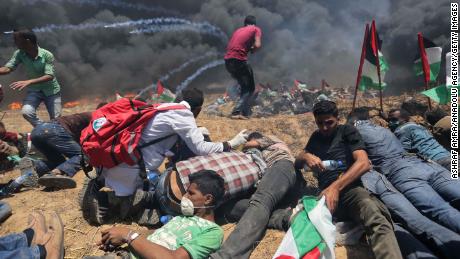 As President Trump’s son-in-law calls for peace, at least [__] people have been killed today and [___] have been injured in Gaza clashes.

52 Palestinians killed on deadliest day since 2014

We must all work to seal the door where evil dwells. Those who ignored the early signs of Nazism were guilty of the complicit silence which enabled WW-II.  Men and women of goodwill in America, and all over the world, must stand up and prevent the Final War. The Forces of Evil must be defeated, again.

[EOH 575] The Christian concept of the return of a triumphant Christ, coming in the clouds of heaven to Jerusalem, there to reign for a thousand years, is true in one way and utterly false as to design, location and method. Christ will return; the Jerusalem referred to (literally “the place of peace”) is not the chief city of a small country called Palestine or the Holy Land; the word is simply symbolic of a peaceful world—a world which, through its own self-initiated efforts, has attained a general quietude and has acquired a certain measure of right human relations.

From the centre where the Will of God is known
Let purpose guide all little human wills –
The purpose which the Masters know and serve.

From the centre which we call the human race
Let the Plan of Love and Light work out
And may it seal the door where evil dwells.

THE PROBLEM OF INTERNATIONAL UNITY

Unity and right human relations—individual, communal, national and international—can be brought about by the united action of the men and women of goodwill in every country.

There must be freedom to travel everywhere in any direction and in any country; by means of this free intercourse, members of the human family may get to know each other and to appreciate each other; passports and visas should be discontinued because they are symbols of the great heresy of separateness.

The past as prelude: Zionism and the betrayal of American democratic principles, 1917-1948

Drawing on State Department records and other contemporary sources, this article shows how biblical romanticism took precedence over traditional democratic values in shaping the U .S. Middle East policy as far back as 1917, when it supported Zionism’s aims in Palestine against the wishes of 92 percent of the population. The article also makes clear that a dynamic remarkably similar to later patterns was already in place as of the 1920s: a presidency swayed by religious belief and electoral considerations, a Congress powerfully influenced by the Zionist lobby, a State Department attempting to steer a middle course and resist Zionist pressures, and an Arab American community unable to gain an effective hearing. Thus, the anti-Palestinian rhetoric of today, with its “doublespeak” overtones, has deep roots in the past.

“Thus, because of racism, colonist sentiments, and biblically rooted religious mythology, the United States betrayed its democratic principles. Arab-Americans, asserting the democratic rights of a majority to self-determination, majority rule, and representative government, were ignored. American Zionists, claiming the same rights for a minuscule minority, and doing everything they could to delay and undermine democracy in Palestine until the day Zionism could control and manipulate the governmental process, were embraced as the civilized purveyors of American principles. As it was then, so it is now —the past as prelude.”

Madeleine Albright Is Worried. We Should Be, Too.